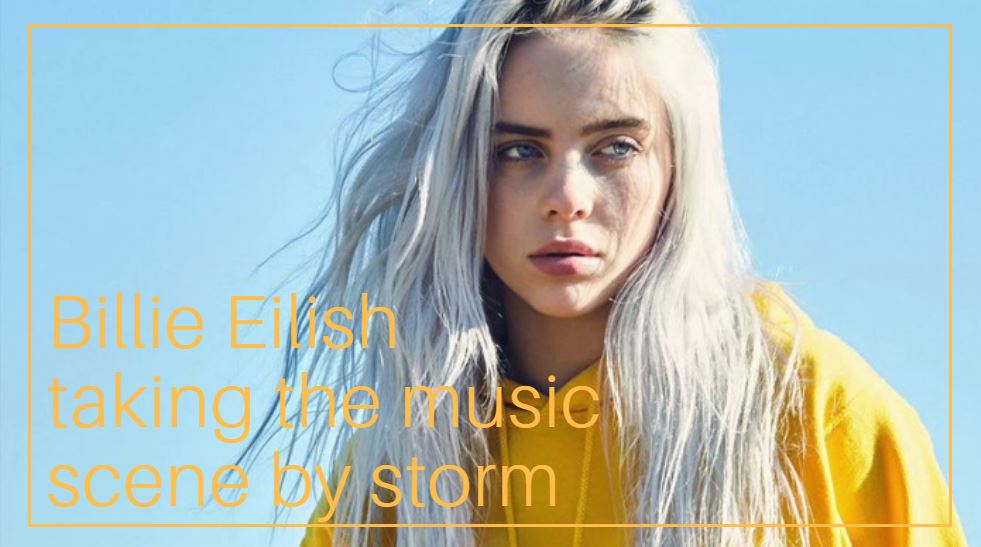 Who is Billie Eilish?

Up-and-coming artist Billie Eilish is taking the music scene by storm. In 2016 she released her first single ‘Ocean Eyes’ on SoundCloud, which was originally intended only as a track for her dance teacher to use for choreography. The song turned into a mega hit and now has over 2 million streams. Although she is only 16, her songs include very unexpected and sometimes intimidating themes such as setting someone’s car on fire, killing all of her friends, and holding someone hostage.

Billie’s style is just as unique as her music. She can usually be seen rocking a combo of baggy track suits, sneakers, and designer accessories. She loves dressing outside her comfort zone and explains her simple reasoning as “I love being judged.” She goes on to say that she would feel out of place if she dressed like everyone else. Billie’s unconventional style, along with her silver/blue hair, is what has set her apart from other cookie-cutter pop stars. The title of her EP Don’t Smile at Me is inspired by Billie’s hatred for smiling. Claiming that smiling makes her feel “weak and powerless”, she refuses to smile for photos. Don’t be mistaken though, Billie is very sweet and her fan base loves her for her originality, and she loves them just as much – and claims she wouldn’t be where she is today without them.

Unlike most celebrities, Billie tries to devote as much attention to her fans as possible. Although she has expressed that she generally doesn’t like social media, she loves connecting with her millions of fans on Twitter and Instagram, and refers to them as her family. She sees them not just as fans but as regular people that she can interact with and relate to.

Billie began writing songs when she was just 11 years old, and her first “real” composition ‘Fingers Crossed’ is actually about The Walking Dead. She and her brother Finneas almost always write songs together, and according to Billie they can finish writing songs in just one day. She doesn’t settle though – Billie says that her writing standards are really high, and if they weren’t she would have written 2,000 songs by now. She likes working alongside her brother because they can be honest with each other, whereas working with a stranger plays out a little differently. Although it took them a while before they finally released the EP, Billie is very glad they put it out there for people to enjoy.

Because she is only 16, Billie is constantly being questioned about her age. She responds to this by saying she knows what she wants, and she wants people to take her and her ideas seriously. She believes that age doesn’t matter as much as most people think it does, and says “You can be any age to feel anything, really.” While a few people have treated Billie like a kid, she is grateful that most of the people she works with respect her and what she wants.

On the subject of fame, Billie claims that “being famous sucks so much”, and warns anyone wanting to be famous just for the sake of being famous that it is not worth it. She claims the only good thing that’s come from her experience is that she is successful at doing what she loves.