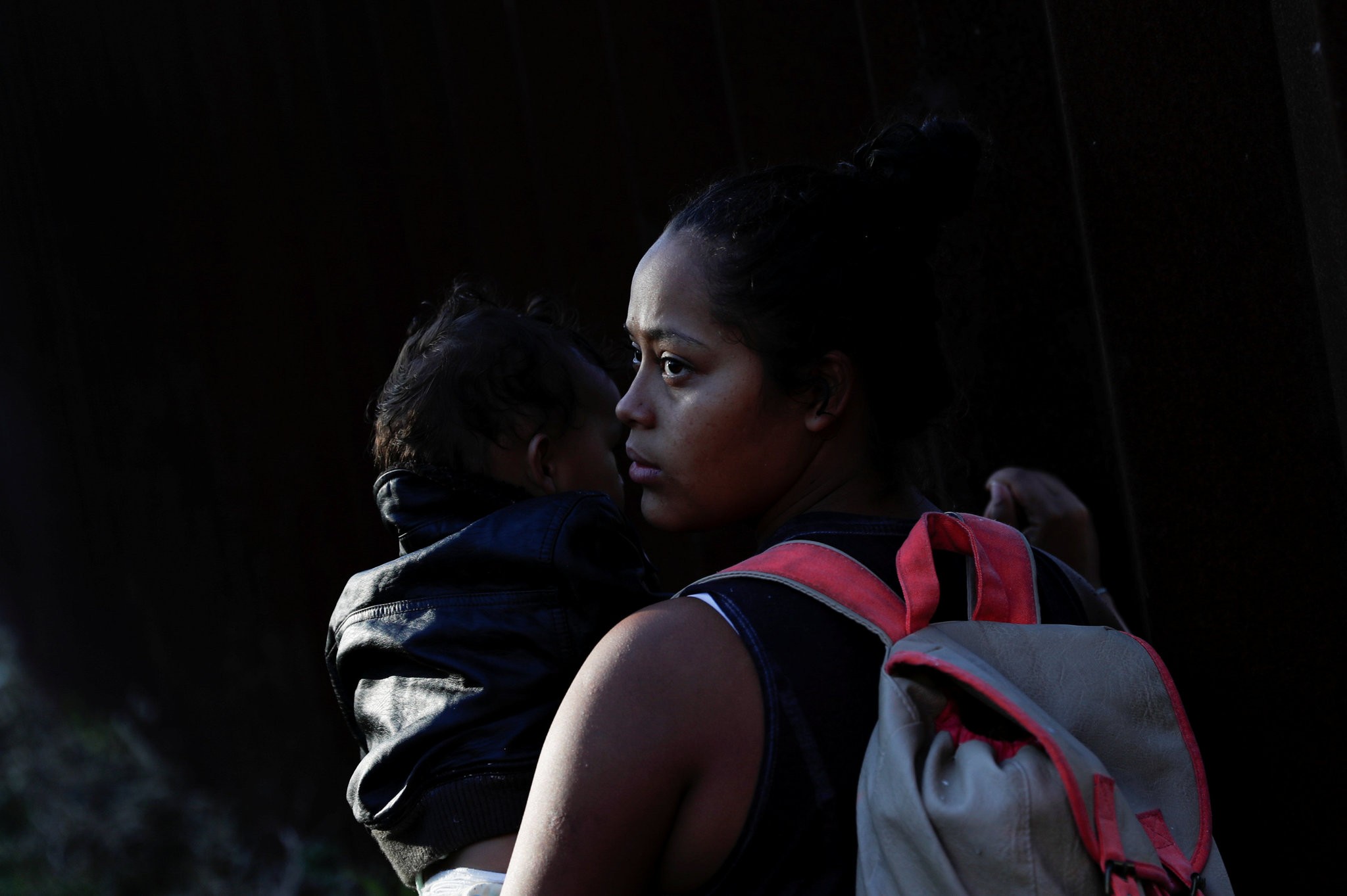 None of Us Deserve Citizenship

Late last month, 19-year-old Maryury Elizabeth Serrano-Hernandez reportedly scaled a wall along the United States-Mexico border while eight months pregnant and gave birth within hours of placing her feet on American soil. She was part of a widely publicized Central American caravan and traveled more than 2,000 miles from Honduras propelled by the dream of giving her new baby, as well as her 3-year-old son, a life free from the violence and grinding poverty she endured back home. She views her child’s birth in the United States as a “big reward” for her courage, perseverance and faith. As she explained to Univision, which documented parts of her family’s journey, “With faith in God, I always said my son will be born there.”

For some Americans, Ms. Serrano-Hernandez’s story is nothing short of heroic, given the suffering she endured and the extraordinary obstacles she overcame to give her children a chance at a better life. For others, her story represents everything that’s wrong with our immigration system. The Border Patrol said that Ms. Serrano-Hernandez and her family were released on their own recognizance. Her newborn is, for many, just another “anchor baby,” proof that a more aggressive and unforgiving approach to illegal immigration is warranted and that Trump is right to call for an end to birthright citizenship.

No matter what side of the debate one gravitates toward, stories like Ms. Serrano-Hernandez’s highlight the moral quagmire that we’ve created by treating the migration of desperately poor people as a problem that can best be addressed by border walls, tear gas, detention camps, militarized policing and mass deportation — except, of course, for the relative few, truly “deserving” individuals who may be granted legal citizenship (typically after years of waiting and hundreds or thousands of dollars in attorney’s fees) if they can win asylum.

Answering these questions may be easy legally, but they’re more difficult morally. After all, none of us born here did anything to deserve our citizenship. On what moral grounds can we deny others rights, privileges and opportunities that we did not earn ourselves?

Jose Antonio Vargas’s powerful book “Dear America: Notes of an Undocumented Citizen” wrestles with the moral, emotional and psychological dimensions of America’s perennial question: Who deserves citizenship? With remarkable sensitivity to the extraordinarily wide range of people whose lives are affected by our nation’s immigration policies, he writes from the perspective of someone who was brought to this country illegally at the age of 12 to live with his grandparents, leaving his mother in the Philippines. Ever since his grandfather confessed to him, at age 16, that “you are not supposed to be here,” he has battled deep feelings of unworthiness and has striven to earn the right to belong. Yet no matter how much he achieved or contributed — indeed, even after winning a Pulitzer Prize for journalism — he still had the nagging feeling that he didn’t deserve to be here. Only after being arrested near the border and held in a cell with a group of terrified undocumented boys who had been separated from their families did he have an awakening: It was suddenly obvious to him that the boys huddled near him deserved safety, security and a place they could call home — a place where they could not only survive but also thrive. If they deserved such a thing, he did too. “Home is not something I should have to earn,” he wrote. It’s something we all have a right to.

Many people will sympathize with Mr. Vargas’s story but recoil at his bold conclusion, as it seems to imply support for open borders — a position that no Republican or Democratic member of Congress supports or even takes seriously. This reaction seems misplaced. The deeper question raised isn’t whether our borders should be open or closed (generally a false dichotomy) but rather how we ought to manage immigration in a manner that honors the dignity, humanity and legitimate interests of all concerned.

Reaching for a radically more humane immigration system is not pie-in-the-sky, utopian dreaming. But it does require a certain measure of humility on the part of those of us who have benefited from birthright citizenship. Rather than viewing immigrants as seeking something that we, Americans, have a moral right to withhold from them, we ought to begin by acknowledging that none of us who were born here did anything to deserve our citizenship, and yet all of us — no matter where we were born — deserve compassion and basic human rights.

It’s tempting to imagine that our position as gatekeepers is morally sound — since we’re frequently reminded that “all nations have a right to defend their borders” — but our relationship to those who are fleeing poverty and violence is morally complex. Not only does birthright citizenship bestow upon us a privileged status that we haven’t earned; our nation’s unparalleled wealth and power, as well as our actual borders, lack a sturdy moral foundation. But for slavery, genocide and colonization, we would not be the wealthiest, most powerful nation in the world — in fact, our nation would not even exist. This is not hyperbole; it’s history. There’s good reason some Mexicans say: “We didn’t cross the border. The border crossed us.” That is, in fact, what happened.

Of course, it can be argued that virtually all modern nation-states were created through violence, exploitation and war. But we claim to be unlike most nation-states; indeed, we insist that we’re “exceptional.” We are the only nation that advertises itself as “a nation of immigrants” and the “land of the free,” an advertising campaign complete with a Statute of Liberty whose pedestal includes a plaque of a poem that reads in part:

“Give me your tired, your poor,

The wretched refuse of your teeming shore.

Send these, the homeless, tempest-tost to me,

I lift my lamp beside the golden door!”

The founders of our nation did not merely wax poetic about the virtues of liberty; our nation was birthed by a Declaration of Independence, a document that insists that “all men are created equal” with “certain inalienable rights” including “life, liberty and the pursuit of happiness.” After centuries of struggle, including a Civil War, we now claim to understand that all people — not just propertied white men — are created equal with basic, inalienable human rights. If this is true, on what moral grounds can we greet immigrants with tear gas and lock them in for-profit detention camps, or build walls against the huddled masses yearning to breathe free? After all, what was Ms. Serrano-Hernandez doing if not pursuing life, liberty and happiness for herself and her family? Did she not display a level of courage, fortitude and determination to win freedom for herself and those she loved comparable to that of those who helped birth our nation?

Even if we’re tempted to treat as irrelevant the circumstances of our nation’s founding, we cannot ignore the fact that our recent and current foreign policies, trade agreements and military adventures — including our global drug wars — have greatly contributed to the immigration crisis that our nation is now trying to solve through border walls and mass deportation. Would Ms. Serrano-Hernandez and her family even be knocking at our door today if it weren’t for the disastrous policies our government has pursued in Honduras for decades?

The anthropologist Margaret Mead famously said, “Never doubt that a small group of thoughtful, committed citizens can change the world; indeed, it’s the only thing that ever has.” Today a relatively small group of courageous noncitizens — people like Mr. Vargas, Ms. Serrano-Hernandez, the Dreamers and the thousands who joined the caravan — are challenging us to see immigrants not only as fully human, created equal, with certain inalienable rights but also morally entitled to far greater care, compassion and concern than we have managed to muster to date.

To travel is to learn new things by expanding our perspective and taking each time a new self challenge. To more salonhanan.com