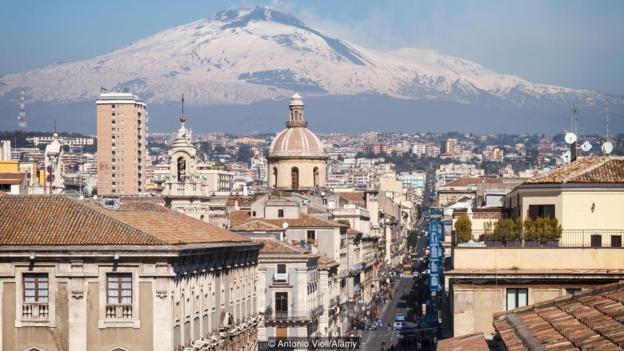 The gender fight behind sicily’s most iconic snaks

Danilo Festa felt moved when, last August, while participating in a sit-in protest against Italy’s anti-migrant policies and to welcome asylum seekers in eastern Sicily, he saw many of his fellow citizens show up to the docks of Catania’s port with arancini, a local fried rice ball made with savoury fillings like green peas and meat.

“A group of artists had suggested arancini as symbol of the protests,” Festa recalled. “It was a happy moment that broke the tense political climate.”

Arancino is the kind of local food you offer hungry guests

The peaceful gathering was a public show of solidarity for the more than 100 migrants rescued at sea aboard the Diciotti vessel on 15 August 2018, who were denied landing for 10 days after Italy’s interior minister, Matteo Salvini, claimed it was other EU states’ responsibility to take them in.

Following that decision, some activists decided to greet the migrants with this popular Sicilian snack.

“Arancino is the kind of local food you offer hungry guests,” Festa said. “Considering it also evolved into its current form under the many different … civilisations that conquered Sicily throughout the centuries, it’s also a symbol of unity between the two sides of the sea.”

Activists in Sicily brought arancini to welcome migrants who had been stranded at sea for days before being permitted to disembark on the island (Credits: Stefania D’Ignoti)

You may also be interested in:
• France’s outrage over a pastry
• An iconic Roman dish under fire
• The truth about the humble French fry

Praised for its unique texture – crunchy on the outside and soft and savoury on the inside – and its message of solidarity, this iconic Sicilian dish has been a surprising source of conflict within the island.

One of the biggest reasons behind the fame of this street food – normally served at bars or sidewalk food stalls, simply wrapped in a napkin to take away – is the huge gender dilemma it’s been posing on Sicilians for decades. While those living on the eastern side of the island use the masculine name of arancino (arancini when plural), residents of the western side advocate for the feminine form, arancina (arancine when plural), when referring to the fried delicacy. It’s been such a triggering discussion that even Italian VIPs like fashion designer Chiara Ferragni couldn’t avoid being scolded for preferring one gender over the other.

“The fight is a transliteration of the competition between Sicily’s two major cities, Catania and Palermo, that chose this culinary debate as the battlefield for their cultural hegemony over the island,” said Sicilian cuisine expert Gaetano Basile.

According to Basile, the fried shell, golden and round, makes it look like a sour orange – a citrus imported by the Arabs between the 9th and 11th Centuries – which in the Sicilian dialect takes the name of arànciu (as masculine nouns typically end in ‘u’ in the Sicilian dialect), hence the name arancinu (small, sour orange). The name was later ‘Italianised’ to ‘arancino’ after Italy conquered Sicily.

“But then, in 1486, Portuguese merchants arrived to the port of Palermo bringing sweet oranges, called laranja,” Basile explained. “Because they wanted the arancinu to remind of the nicer flavour of this new kind of orange, citizens of Palermo and the surrounding areas changed the name from arancinu to the feminine arancina. That linguistic change, however, never occurred on the eastern side of the island.”

From that moment, the two coasts started developing two similar, but essentially different, types of arancini. “The ones in Palermo kept the original round shape and preserved their Arab roots by adding saffron to the rice; those in Catania evolved into a cone to represent Mount Etna, the volcano rising above the eastern coast,” Basile said.

The beloved Sicilian snack has been at the centre of a gender dilemma for decades (Credit: Pera Comics)

Spanish rulers introduced tomatoes to Sicily in the 15th Century, but according to Basile, it wasn’t until the mid-19th Century that both sides of the island started adding passata (tomato puree) to the original recipe that came to life under the Arab domination in the Middle Ages. This brought the two coasts’ versions closer together. And when Italy became a nation-state incorporating the Mediterranean island in 1861, the arancino and the arancina officially became a single, representative example of Southern Italian cuisine while maintaining its gender difference in spoken language, Basile explained.

This didn’t seem to bother anyone at the time. However, with the birth of social media and Italy’s increasing concerns over gender theory and linguistic clarity and the differences between masculine and feminine, as reported by Italian magazine Internazionale, this became “the mother of all Sicilian fights,” as Festa puts it. The divide became so critical that it even required an intervention by Accademia della Crusca, Italy’s highest institution for the regulation of language.

It became the mother of all Sicilian fights

In January 2016, the academy published a special report on the arancino-vs-arancina debate, opting for a politically correct resolution. It claimed that both versions are correct, but that the feminine version is slightly more correct because fruits are generally feminine nouns in the Italian language.

Stefania Iannizzotto, the linguistic consultant responsible for researching and publishing the piece, said the institute has received, and keeps receiving, many letters and emails to settle the arancino-arancina debate. “As the only Sicilian working there, I was assigned to take care of the issue, even though I was scared I wouldn’t be neutral enough. It was a tough responsibility,” she explained.

In Palermo and western Sicily they’re known as ‘arancina’, the feminine noun, while Catania and eastern Sicily use the masculine noun, ‘arancino’ (Credit: Boaz Rottem/Alamy)

Iannizzotto comes from the Ragusa area, the only south-eastern stronghold that uses the feminine noun, so taking a side could’ve meant being mocked or berated by her family members or her friends in Catania, where she moved to after high school.

“It started as an inside joke, but social networks turned it into a war. This gender fight will never end,” Iannizzotto said exhaustedly.

The Accademia della Crusca’s intervention, however, didn’t settle the argument. Instead, it just intensified it. “The publication received a lot of media attention. Every time I would read my interviews published on Facebook, I would always find some hateful comments against me for trying to settle the dispute,” Iannizzotto said.

Last May, the linguist was invited to speak at the Catania Street Food Fest, where among cooking classes and free appetizers, she believed her linguistic workshop on the arancino-arancina issue would be the most boring part of the event. “It was raining that day and I didn’t expect much attendance; instead, dozens of participants showed up, making me realise the seriousness of people’s interest in learning the use of the correct terms,” she said.

The current uproar has also affected Sicilian businesses serving the dish to locals and tourists alike. In Catania’s historical city centre, customers inside Savia order ‘arancina’ at the counter. The unusual gender use here in ‘arancino land’ is not a mistake by naive outsiders but rather the affirmation of confident locals. The famous cafeteria, established in 1897, started making arancine in the 1970s. According to Claudio Lombardo, fourth-generation owner, his grandfather followed Palermo’s idea that the arancina imitates the shape of sweet oranges, and hence must be identified with the female gender.

“As far as I know, we’re the only place in Catania calling them arancine. No-one ever paid attention to it, as we would never correct our customers when ordering an arancina with an ‘o’,” Lombardo said. “Then people on social media started writing blog posts about it… and that’s when the problems began.”

This gender fight will never end

Lombardo recounted how he started receiving insults, curse words and even boycott and death threats when some too-vocal residents learned about the shop’s ‘inappropriate’ language choice via Facebook.

“So to avoid a war, in summer 2017, we decided to change the official name tags used in our store to ‘arancinu’ [the original Sicilian term] and save jobs by not closing down our century-old business,” he said. However, Lombardo explained that he will never change his mind about arancine’s real gender, which are “female, without any doubt, like all the beautiful things”.

Businesses around Sicily have attempted to bring a sense of peace by introducing gender-neutral terms (Credits: Stefania D’Ignoti)

There have also been other attempts to bring a sense of peace. Gender neutral terms, including arancin* and arancin@, which avoid the use of any masculine or feminine forms, promote inclusiveness, acceptance and even sexual open-mindedness in this mostly conservative region, and have helped tackle the no-longer playful fight.

Andrea Graziano, founder of Fud Bottega Sicula, a restaurant spreading Sicilian nouvelle cuisine culture, proposed a one-time truce in his restaurants in Palermo and Catania last December: an ‘arancinie’ main course with two arancine and two arancini on the same plate, made into their corresponding shapes. “I don’t care about the debate and never took it seriously, but I wanted to propose my provocative resolution to finally have a laugh about this ridiculous fight, for once,” Graziano said.

As long as the arancinu is good, don’t get distracted by useless talks and just enjoy the taste

As the gender fight behind Sicily’s most beloved snack seems to only bother local customers, Lombardo’s thought is to focus on his tourist clientele, who are solely interested in enjoying the food experience rather than bothering with the correct linguistic term.

“As long as the arancinu is good, don’t get distracted by useless talks and just enjoy the taste,” he suggested.

And debate or not, one thing is certain: this snack will continue to carry a warm, welcoming message for locals and visitors alike.

Food Wars is a series from BBC Travel that invites you to feel the heat when passions flare around beloved dishes that shape a culture’s identity.