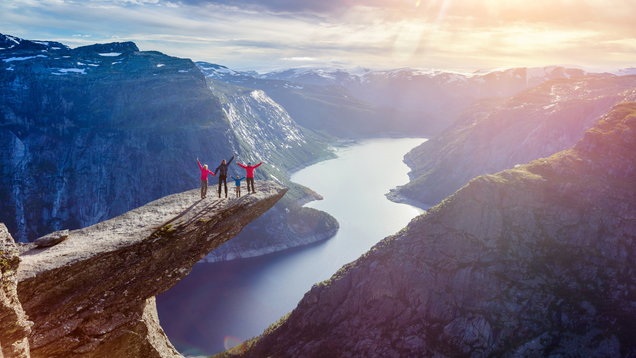 5 parenting lessons we can learn from Sweden

Claire Spreadbury catches up with a dad who moved to Sweden specifically to have children, to find out why life with kids is so good over there.

So many stressed working parents look at Scandinavia with rose-tinted glasses on. It all sounds so idyllic. The time off with the kids, the outdoorsy carefree attitude, the maternity pay…

These are certainly some of the reasons why editor and co-founder of KinBox Magazine Paul Connolly decided to leave the UK.

“When you first move to a Scandinavian country, nothing hits you quite as hard as the differences in the region’s approach to children and parenting. We moved from the UK to northern Sweden six years ago, primarily as a life-change, but also with the hope of having kids – something that was never going to happen given our frantic 12-hour work days in London.”

Joyfully, he had twins a year later, and has learned an awful lot along the way. Here are five Scandi lessons Connolly believes we should all be listening to…

“The country’s approach to gender equality is taken for granted by locals, but a regular source of astonishment to outsiders,” says Connolly. “Every non-Scandinavian on their first walk or drive through a Swedish town is immediately struck by the number of men pushing kids in buggies.

“It’s a common sight in Sweden to see a posse of men wheeling their kids round town centres, before stopping off for an afternoon latte. Where I come from in England, such unusual behaviour would make the local TV news.

“This is the result of Sweden’s incredibly generous 16-month parental leave,” he adds, “which can be shared out between mothers and fathers, with three months of that set aside specifically for each parent.

“This encourages fathers to bond with their children and allows mothers to get back to work. It also gives dads loads of time to drink lattes and hang out with their friends.”

“When I told a UK-based parent of twins our plans to send our 18-month-old twins to daycare, she was inspired to look into similar provisions for her double troubles. She really wanted to get back to work, part-time,” says Connolly.

“Three days later she sent me an email that made me almost white in the face. For the same number of hours that our two spent [in care] in Sweden (a maximum of around £240 a month for both kids), she would have to pay 10 times more each month in the UK. And, no, she doesn’t live in expensive southern England; she lives near Newcastle.”

He continues: “Swedish daycare is so affordable because society wants to give women the chance to go back to work. And Sweden likes toddlers to be socialised as early as possible – it leads to fewer problems later in life, apparently.

“In the UK, childcare provisions now take up nearly 34% of a family’s income. In Sweden it is 4.4%. That disparity is truly vast. Medical care for children is free. The education system up to, and including, university is free. This is great. I don’t want my twin girls to have to pay for their university education and to be encumbered by debt for years after graduation.

“Sweden nurtures its young, understands that you have to invest in youth, not demonise it or financially hamstring it. It’s also a country that values women. Sweden consistently ranks in the top five places to be a woman in the annual World Economic Forum’s Global Gender Gap report. I want my girls to grow up in a country like that.”

3. Treating kids with respect allows them to flourish

“It’s no accident that Greta Thunberg, the schoolgirl who started the youth climate change protest movement is Swedish,” says Connolly. “Kids here are encouraged to have a voice and be an active part of society. Parenting is, on the surface at least, very laid-back. In UK terms, discipline is quite slack, but allowing kids latitude is proving to be rewarding. They feel more connected when they’re not constantly shouted down.

“One British teacher friend, who recently moved to Sweden, said she was amazed that Swedish 14-year-olds in her class were able to talk knowledgeably about Brexit in class – in English!

“The flip side, however, is that it’s a bit dispiriting when visiting Swedish friends let their kids bounce on our furniture and generally run riot in our house – there’s often much biting of British tongues and relief when the little hoodlums head home!”

4. There’s no rush to start school

“Swedish kids don’t have to go to school until they’re seven years old,” notes Connolly. “This doesn’t mean they’re at a disadvantage, though – a study by academics at Stanford University in the US found starting school at a later age reduced cases of inattention and hyperactivity. Kids from 18 months to six-years-old attend inexpensive government-subsidised pre-schools, where unstructured play is used to develop social skills, creativity and imagination. There’s no pressure on kids when it comes to academic performance – having a childhood and enjoying life is more important.”

5. Let them get naked

“Most British people wouldn’t dream of letting our kids run around outside with no clothes on – being naked in public is seen as something to be embarrassed about,” he says with a smile.

“Scandinavian parents have no such hang-ups and believe children should be comfortable with their bodies. It says something about my upbringing when I feel uncomfortable when my girls play naked in the paddling pool or in the lake at the bottom of our garden. But the Swedes don’t give a monkey’s. You’ll even find anatomically-accurate illustrations of naked characters in children’s books, while a cartoon for preschoolers launched by Swedish television featured singing animated male and female genitals. It quickly went viral – and parents loved it.”

Want To Start Selling Your Photos Online? Here Are the Steps to Follow.

The Best Place For Online Ebooks.

How Social Media Stars Can Get to the TOP. To know more >> Theinternationalcampaigner.com

What are the factors that affect  foreign direct investment(FDI)?

Authors Can Make Money Online By Opting To Sell Ebooks With TOP.

2 Great Reasons To Go With TOP For Content Creation.

3 Benefits You Reap By Doing Translation Services For TOP.

2 Good Reasons To Consider Getting Translation Help From TOP.

Their city lacks public spaces for protests, so Beirut residents made their own.