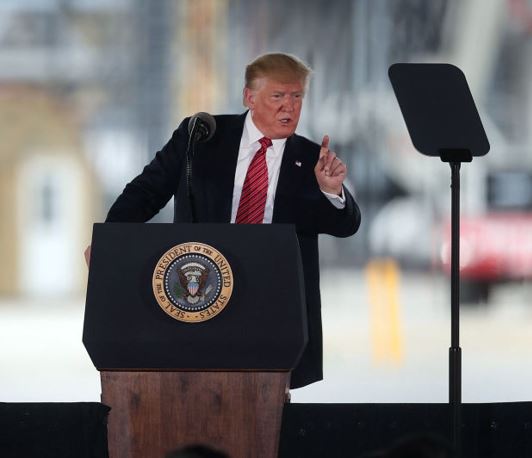 President Trump on Wednesday refused to hand over documents to Congress detailing the administration’s decision to add a citizenship question to the census, claiming they were protected by executive privilege.

The move came as the House Oversight Committee was set to vote on whether Attorney General William Barr and Commerce Secretary Wilbur Ross should be held in contempt of Congress for failing to turn over the subpoenaed documents.

In a letter to the committee’s chair, Rep. Elijah Cummings (D-Maryland), the Justice Department asserted that the Trump administration had “engaged in good-faith efforts” to satisfy the committee’s oversight needs and that the contempt vote was premature.

The administration had turned over more than 17,000 pages of documents, and Ross testified for nearly seven hours.

Justice also said two senior officials sat for interviews with committee staff members and it was working to produce tens of thousands of additional pages of relevant documents.

But that process will now be halted, Justice said.

“Unfortunately, rather than allowing the Department to complete its document production, you have chosen to go forward with an unnecessary and premature contempt vote,” Assistant Attorney General Stephen Boyd wrote in the letter Wednesday.

Democrats fear the question will reduce census participation in immigrant-heavy communities — and some lashed out at Team Trump for stonewalling Congress’ oversight efforts.

“This does not appear to be a good-faith effort at negotiation,” Cummings said in an opening statement at the panel’s meeting.

Rep. Alexandria Ocasio-Cortez said at the Capitol that the census was “one of the most vital and sensitive things we do” and that changes generally remain under consideration for five years.

“I want to know why this question was magically added after we have seen that a political operative knew and detailed an intent to intimidate racial and immigrant communities for a partisan purpose, saying this will hurt Democrats, and help Republicans,” she said.

The New York lawmaker was referring to the late Thomas B. Hofeller, a GOP operative who pushed the administration to add the question to the census.

He wrote a study in 2015 that said that adding a citizenship question would enable Republicans to draft extremely gerrymandered election maps to thwart Democrats across the US.

Hofeller also wrote a portion of a Justice Department letter claiming that the question was needed to enforce the 1965 Voting Rights Act — the administration’s rationale for adding the question, an explanation that Dems called bogus.

The House Judiciary Committee voted last month to hold Barr in contempt of Congress after the department didn’t immediately comply with a subpoena to turn over an unredacted version of special counsel Robert Mueller’s report on the Russia probe and underlying investigative documents.

“Developing your blog is a balancing act between appeasing current readers and reaching out to new ones.” ― Scribendi – Subscribe with THE ONLINE PUBLISHERS to offer your services as a blogger.

Finding Someone To Handle Press Release.

3 Reasons To Sign Up With Top Digital Marketing Platform.

How to Design an Online Banner for Advertising.

3 Reasons To Think About TOP For Online Reputation Building.

2 Reasons All Online Reviewers Need To Be With TOP.

3 Ways To Get Success With Freelance Jobs On TOP.

Why Go With TOP For Any Translation Services.

3 Reasons To Go With TOP For Any Online Translation of Documents.

How to Find the Right Digital Marketing Agency.

Learn How to Get Positive Online Reviews.

Can Depression Increase the Risk of Dementia?.