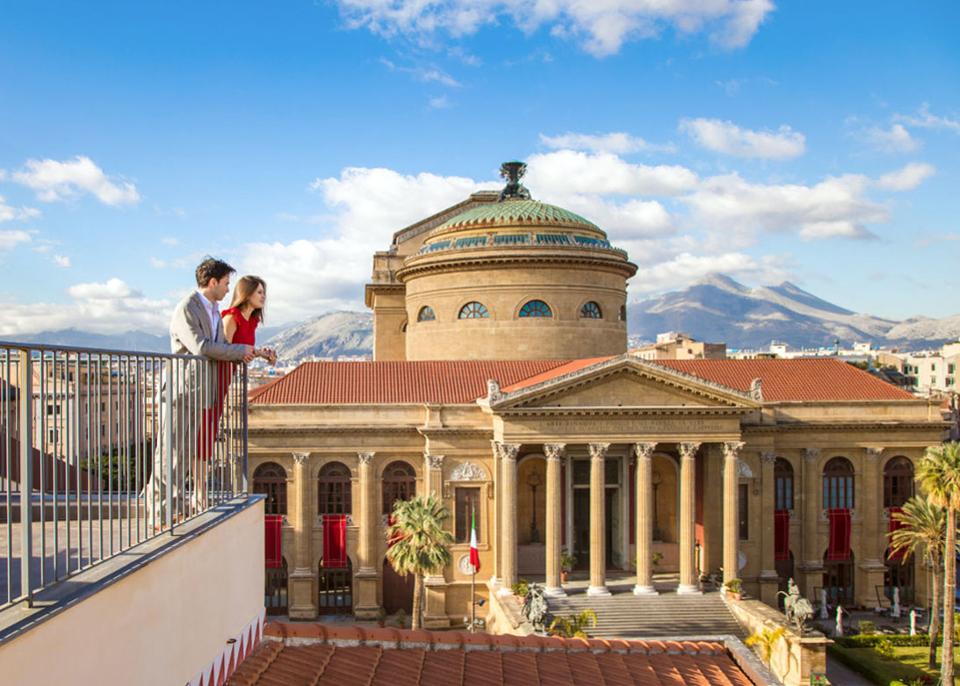 48 Hours In Palermo: What To See, Do And Eat

As the former capital of the Kingdom of Sicily, Palermo has long been regarded as one of the most important and dynamic cities in the Mediterranean. The Phoenicians, Romans, Byzantines, Greeks, Arabs and Normans all left their mark on the city making it a fascinating place to discover. And with United Airlines announcement of a new direct flight from Newark Liberty International Airport to Palermo starting May 20, 2020 (the only daily nonstop flight from the US to Sicily) there’s even more reason to explore this vibrant city.

First things first: breakfast! Make like the locals and keep cool with a granita and brioche. It may seem like an unlikely morning meal, but Sicilians swear by this icy treat which sees fruits and nut pastes churned into a frozen sweet similar to gelato. One of the best places to enjoy this treat in the city is the inconspicuous Caffetteria del Corso, where friendly owner Pino makes a handful of flavors from scratch on a daily basis. Topped with freshly whipped cream, they are an indulgent and refreshing way to start your day.

Palermo is well known for its colorful and bustling open-air markets, including Vucciria, Ballarò and Mercato il Capo. You can shop for seasonal fruits and vegetables and taste Sicilian fried treats at the numerous stands packed within: taste arancini (fried rice balls), pane e panelle (sandwiches stuffed with chickpea fritters) and thick slices of sfincione (a type of focaccia usually topped with a sweet tomato sauce, onions and caciocavallo cheese). Another great place to tr Palermo’s famous fritti is Francu U Vastiddaru, a street food joint down by the port.

Next, stop by nearby Teatro Massimo for a visit of Italy’s illustrious opera house, dedicated to King Victor Emanuel II. The exterior pays homage to Sicily’s Greek roots and incorporates elements from the Selinunte and Agrigento temples. The final scenes of The Godfather III were filmed at the theatre as well.

For a relaxed lunch, head over to Osteria Pane e Alivi for local specialties at a great price, including the house special, spaghetti made with sundried tomatoes, olives, capers and sprinkled with breadcrumbs.

With the afternoon ahead of you, there is plenty of time to take in Palermo’s main sights, including the Quattro Canti, Fontana Pretoria, Santa Maria dell’Ammiraglio, and the Cattedrale of Palermo, which you can easily visit in a couple hours. Pro tip: enter Palazzo Pretorio, the Townhall of Palermo, for a view of Fontana Pretoria from up above. You can also climb the Cathedral for a view from the roof. For an even better view of the city though, climb up the Cupola of San Salvatore – you’ll see all the domes of Palermo and the sea in the distance.

In the evening, enjoy a glass of wine with your toes in the sand at NautoscopioArte, a lively beach and cultural club open from June to October each year. Then head to the retro New York-style dining room at Buatta for a taste of local dishes like Bucatini pasta with cauliflower, raisins and saffron, Aeolian-style fish with tomatoes and Eggplant caponata.

Start your morning at Cioccolateria Lorenzo, a quaint café in the bohemian Khalsa neighborhood that has a tantalizing menu of sweets and caffeinated drinks to power your day. The outdoor courtyard is a lovely place to relax and features paintings and illustrations by local artists for sale on the walls.

Today you’ll pay a visit to the Palazzo dei Normanni, the Royal Palace of Palermo which served as the seat of the Kings of Sicily during the Norman domination. This lavish property, which dates back to the 12th century and is a UNESCO World Heritage Site, is the oldest private residence in Europe. The highlight is the gilded Cappella Palatina, one of the best examples of the city’s unique Arab-Norman-Byzantine style of art and architecture. Inside, the Fondazione Federico II hosts numerous art exhibitions, including a recent show about Flemish paintings and another about Rosalia, the patron saint of Palermo.

Just steps from the Royal Palace of Palermo lies one of Palermo’s most intriguing gems: the Camera delle Meraviglie (or “Room of Wonders”). This mysterious blue chamber is decorated with Arabic inscriptions, verses and designs and arresting for its color and artistry. It was hidden from view for centuries behind layers of plaster in a private home and only recently discovered during routine restoration works, though its function remains unclear. You can visit it on a private tour guided by Giuseppe and Valeria who own the apartment (reservations must be made in advance by calling +39 3383483372).

Don’t miss stopping by nearby Pasticceria Cappello, a historic pastry shop that dates back to 1940, for a taste of Sicilian pastries including cannoli, cassate and other delicacies. If you want to feast on more savory foods, wander back towards the center of town for lunch at Antica Focacceria San Francesco, an institution in the city and a restaurant that is set within one of the loveliest piazzas in the city. Try the Tabulè alla Siciliana (vegetable cous cous) or baked Anelli pasta with ragù.

From here, head north to wander around Castellammare, one of the oldest neighborhoods in Palermo. The Oratory of Santa Cita features an amazing chapel with intricate white stucco sculptures, while the Museo Palazzo Branciforte houses archeological works and a wooden theater with Giacomo Cuticchio’s Sicilian Puppet collection. Be sure to seek out Pietro Tramonte’s outdoor library on Via Monte Santa Rosalia, the largest al fresco “bookstore” in the world. Thousands of volumes line the streets and can be picked up or exchanged through a barter system.

In the evening, whet your appetite at CiCala, a cozy wine and cocktail bar that is a popular hangout with locals. You can stick around for artisanal pizzas and fresh pastas or ‘round the corner for dinner at Osteria Mangia e Bevi, a trattoria with heart (and a delightfully shabby chic vibe). One of the restaurant’s highlights is a unique version of Pasta alla Norma that sees spaghetti with tomato sauce, eggplants and cheese fried and served directly in the pan.

Located within the 18th century Palazzo Lanza Tomasi, Butera28 is a collection of elegant, historic apartments – many with views of the sea. The Palazzo originally belonged to writer Giuseppe Tomasi di Lampedusa who wrote The Leopard, an Italian novel inspired by his great-grandfather. Today, it is owned by his heirs Gioacchino and Nicoletta Lanza Tomasi, the Duke and Duchess of Palma, who have restored the home to its former glory. Butera28 also hosts A Day Cooking with the Duchess, Sicilian cooking lessons hosted by Ms. Lanza Tomasi herself.

Across the street from Teatro Massimo, Palazzo Sovrana offers incredible views of the opera house and surrounding mountains. The twelve luxury apartments are spacious and bright, with modern design elements and the latest technology. They each have private balconies and guests can also enjoy the rooftop panoramic terrace at breakfast each morning.

How Does Online Banner Advertising Work?. To know more >> Theinternationalcampaigner.com

How to Design an Online Banner for Advertising.

Why TOP Platform Is A One Stop Shop For Making Money Online.

TOP Helps You Earn Money As A Social Media Influencer From Home.

Sell Photos In One Photos Gallery Through TOP.

Easier For Writers To Earn With TOP Platform

Why TOP Is Your Best Shot For Online Reputation Repair.

3 Reasons To Register To Review With TOP.

How Advertisers Can Get More Out Of A Site With TOP.

If Facebook and Google don’t fix their problems, advertising execs say they could go somewhere else.

US inflation picks up in April as spending slows.

Australia’s Richest 2019: In A Down Year, Two Miners Break Back Into The Top 50.

Trump’s tax overhaul is taking a serious toll on the Hamptons real-estate market.

Why is the Brecon by-election so important to Boris?.

Millions In India Face Uncertain Future After Being Left Off Citizenship List.