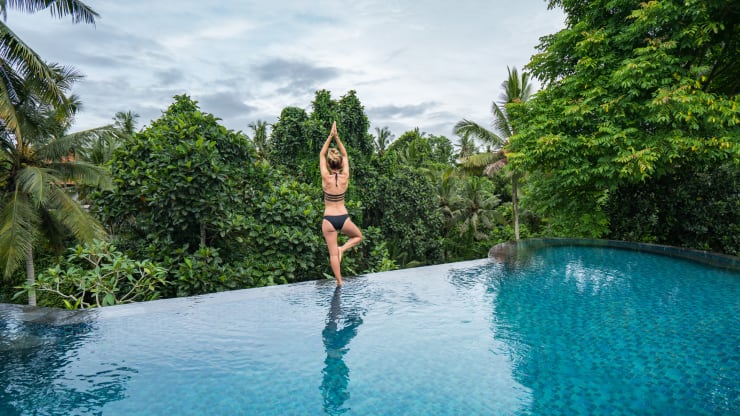 How a trip to Bali made me love traveling alone

I didn’t relish the thought of going on vacation alone — but Bali turned out to be a great place to learn how to revel in the joy of my own company.

A friend from New Zealand invited me on a fitness retreat she was running outside the coastal town of Canggu on the island’s south coast, so I decided to head to Bali eight days ahead of time to explore.

It wasn’t the first time I’d traveled by myself, but a week before I flew, nerves flared. What if I spoke to no one for a week? Would people think it weird I was on my own? And would I be safe?

I even started resenting “having” to go away solo.

After a 20-hour journey from London, I arrived at my guesthouse at 2 a.m., a small place in the beachside town of Sanur with rooms set around a pool and tropical garden. Things didn’t get off to a great start as my ground-floor bungalow lacked a key, so I couldn’t lock myself in. I met a couple of Australians in reception who assured me the place was safe, so I took my chances.

I didn’t realize at the time, but Sanur is where Barack Obama finished his first book, “Dreams From My Father,” back in 1993 when he spent several intense weeks alone to make his deadline. It was probably very sleepy in the 1990s and still retains its relatively slow pace, especially on the beach side of town.

Sanur was a good place to get over jet lag. I read on the beach and hired a bike to cycle the length of its seaside boardwalk. I spent a morning on a pool lounge chair but found myself surrounded by vacationing couples. When a nearby guitarist started playing Eric Clapton ballads over lunch, I decided it was time to move on.

The next few days were more productive: I loved the yoga classes at the Power of Now Oasis, an ark-shaped bamboo yoga studio by the beach with its own sacred cow named Angelique (also known as its “head meditator”).

A noticeboard at the Power of Now Oasis in Sanur, Bali.
CNBC

I went on an excellent snorkeling trip organized by All 4 Diving Indonesia. The other participants were from New Zealand, Europe and China, and it was good to meet some like-minded people as we motored through the choppy waters on the way to the island of Nusa Penida. The swell can be big, so it’s a good idea to take a motion sickness pill before heading off. I swapped details with several people, and we planned to meet up the following week.

Eating alone is often a concern for solo travelers, so I headed to the Sindhu night market in Sanur, where communal tables and plastic chairs were set up around small food stalls selling cheap, hot food. The largest queue was for the satay chicken skewer stand, but I opted for bakso, an Indonesian broth with meatballs, noodles and vegetables that cost about $1 for a medium-sized bowl. As well as cheap eats, it was a place where Balinese people had dinner, so there were fewer tourists. 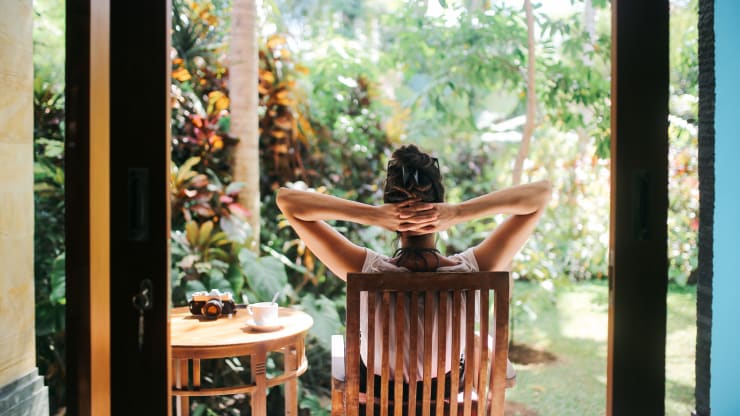 Another place I liked was Genius Café at the southern end of the beach in Sanur. The people there are happy to allow customers to work on laptops or lounge on shaded beanbags, and they also organize salsa nights and beach litter pickups.

Sanur was an easy place to chat to people: around the pool at my guesthouse and to the owners of warungs, or family-run restaurants. But the real test of being in my own company came next: a silent retreat.

The sound of silence

Bali Silent Retreat turned out to be the highlight of my trip.

Surrounded by rice fields and overlooked by Mount Batukaru in the center of the island, the place is a real sanctuary, with an extensive vegetable garden and twice-daily yoga and meditation sessions (the teachers can speak). Rooms are basic — with an open wall overlooking the jungle — and the food is excellent.

It’s not a solitary confinement type of place where guests are not allowed eye contact; it’s more of a quiet retreat to enjoy nature and exercise while resetting your mind. I felt a lurch as I locked away my laptop, phone and Kindle, but it lasted seconds, and I quickly got used to the pace of the place: people moved around slowly and purposefully, taking in their environment.

Not having to talk to anyone was liberating. I had no worries about trying to fit into a group or having to chat with someone I didn’t warm to. I had to come to my own conclusions about life’s concerns, with no one else’s opinions clouding my thoughts. There was a simple joy at noticing brightly-colored birds I’d never seen before or listening to all the sounds of the jungle that joined together like an orchestra.

My mind opened up as I climbed a wooden stairway with words like “light,” “thanks,” “duality” and “flow” painted on the steps, and I found myself giggling silently as I tried to relax on a meditation bench with icy cold water running over my head. Afterwards, I lay on a sarong on the grass and rejoiced in the feeling of the sun drying me.

I also stopped planning and started to go with the flow. Should I do the 10 a.m. excursion to the local hot springs the next day or hike the rice terraces around the retreat? I could decide when I woke up.

Instead of trying to schedule activities, I learned to let things unfold naturally, something I tried to do when I got home. There’s even a notice in the dining area telling guests what day of the week it is, should they lose track of time.

I realized that always being busy or distracted by a screen isn’t good — we can’t rely on sleep alone to reset our minds: They need clearing during the day too.

From solo to group travel

After three days, I left the retreat for Bingin, a small beachside town on southern Bali’s Bukit Peninsula. Its slow pace and surf vibe were a good reintroduction to “real” life, and I tore up any plans I had and just hung out on the pale sand beach, ate freshly-barbecued prawns at a cliffside bar, and grinned internally at the Instagrammers in complicated bikinis posing endlessly for sunset photos. I did early morning yoga at The Temple Lodge, a clifftop guesthouse, and drank masala chai at Drifter Surf Shop and Café.

The author at Superfood Canggu.
CNBC

After a night in Bingin, it was time to start the fitness holiday, based in a villa near Canggu. Suddenly, I found myself doing 7 a.m. circuit training around a pool to loud music with eight other women, a big contrast to the more meditative parts of my trip.

My time at the silent retreat had taught me to simply accept things as they are, and I ended up loving the group workouts. I also enjoyed swinging upside down at an aerial yoga class at Serenity Eco Guesthouse and Yoga and drinking fresh juice and coffee at Superfood Canggu.

Bali was a very easy place to travel by myself.

I booked taxis through hotels or used ride-hailing app Gojek for cars and scooters in the larger towns. I loved doing exactly what I wanted, when I wanted (which I realize is a privilege). On the occasions where taxi drivers asked where my husband was, I’d simply reply that he was arriving the next day.

Traveling solo also encouraged me to have more conversations. I asked Balinese people how they felt about mass tourism on the island and got mixed reactions. Many tourists head straight to Bali’s large resorts in the south and spend their nights at beach clubs without exploring the island’s deeply spiritual Hindu culture. Local people seemed to rue that, but on the other hand, they welcomed the economic boost.

Traffic is a huge problem around Canggu and the surrounding towns. When I go back, I plan to hire a scooter and escape to the center of the island where hydrangea and marigold plantations provide flowers for the daily offerings made to the gods.

And next time, I’ll be happily going it alone.

“Essentially what photography is, is life lit up.”— Sam Abell – Visit The Online Publishers TOP online photos for inspiring, professional photography. Want To Start Selling Your Photos Online? Here Are the Steps to Follow

From finding a broad variety of good Ebooks to read, to writing some to be included in the ebooks library, TOP platform is a space that has a lot to offer both freelancers and clients with not only the library for ebooks, but with so much more.