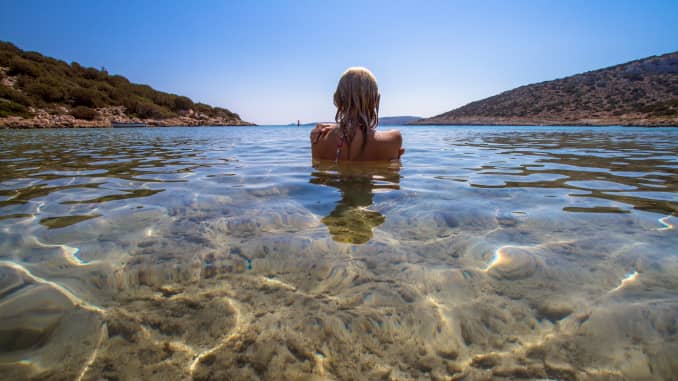 Some habits are hard to break — but that doesn’t seem to be the case when it comes to travel.

Travelers’ habits are changing — quickly and en masse. People are bypassing big cities in favor of smaller destinations that attract fewer tourists, and outside activities such as hiking and biking are attracting more interest than before.

To avoid crowds while spending time in the great outdoors, here are seven spots worth considering once it’s safe to travel again.

France has been the most visited country in the world for years, with travelers congregating in Paris in the interior, the French Riviera in the south and the country’s world-famous wine regions dispersed throughout the lower two-thirds of the country.

But what of the north? Regions situated along the English Channel, such as Normandy, receive a small fraction of France’s tourists, which makes them ideal for travelers wishing to experience the country while avoiding large groups.

Though Normandy is relatively quiet, crowds are common at Mont Saint-Michel, a Gothic-style Benedictine abbey located less than a mile from the French mainland.
MathieuRivrin | Moment | Getty Images

Normandy is popular with World War II history buffs who come to see the famous D-Day beach invasion sites, as well as accompanying cemeteries and memorials. Others are enticed by the seaside beach towns of Deauville and Trouville, the cobblestone alleyways of Honfleur and the majestic tidal island of Mont Saint-Michel.

Like much of France, food is another draw. Normandy is famous for Camembert cheese, Calvados liqueur and tarte aux pommes (apple tarts).

The ‘other’ islands of Greece

In the mid-1990s, Greece received about 10 million tourists a year, according to the World Bank. By 2019, that number had more than tripled.

Five regions accounted for 88% of all overnight stays in 2017, namely the South Aegean, Crete, Ionian Islands, Central Macedonia and Attica, according to a report by PricewaterhouseCoopers. Nearly half of all hotel rooms are located on Crete and the South Aegean islands, the latter including the popular destinations of Santorini, Mykonos and Rhodes.

Travelers can escape the crowds by choosing a Greek island, such as Lipsi, that receives far fewer tourists than Santorini or Mykonos.
Fabio Sabatini | Moment Open | Getty Images

With tourists tightly concentrated in the most popular Greek islands, that leaves many others with far fewer tourists, including Iraklia in the Cyclades island group and Lipsi in the Dodecanese, said Makis Bitzios, general manager of Greek tourism consultancy Remake.

“Both islands are very beautiful, without crowds, very authentic and not as known as many other Greek destinations,” he said.

Many international tourists to Vietnam head north to Hanoi and Halong Bay or south to Ho Chi Minh City.

Those who do venture to the center typically go to the old town of Hoi An, the glitzy hotels outside of Da Nang or to the historic sites of Hue and My Son.

Several years ago, a small number of resorts bet that travelers would be attracted to the sleepier parts of Vietnam.

Anantara, a luxury brand from Minor Hotels group, was one of them. It opened Anantara Quy Nhon Villas in 2018 as the first five-star international hotel, in a part of Vietnam that received few international visitors.

The resort has 26 sea-facing villas, each with ocean views and private pools.

“Both Anantara Quy Nhon Villas and Anantara Mui Ne are located in more off the beaten track destinations and in their own enclosed locations affording peaceful experiences, but within easy reach of local sites,” Pieter van der Hoeven, the brand’s regional general manager, told CNBC Global Traveler by email.

Another attraction to the country’s interior is the colossal Son Doong cave. First explored in 2009, only 1,000 travelers are permitted to explore it every year, a limit put in place to protect the cave, which is believed to be one of the largest and most magnificent in the world.

Not to be confused with Kanagawa, the popular coastal prefecture just south of Tokyo, Kagawa is Japan’s smallest prefecture by geographic size. At about 724 square miles, it’s about two-and-a-half times larger than New York City, yet home to fewer than 1 million people.

Located on the island of Shikoku, Kagawa receives a small share of Japan’s tourists. In 2019, fewer than 550,000 of the nearly 32 million international tourists to Japan went to Kagawa, according to the Japan National Tourism Organization.

Travelers who arrive to see feudal castles, temples and gardens and to eat udon — the famous dish is closely tied to the prefecture, which produces the noodles from locally-farmed wheat — can look into Urashima Village.

Urashima Village is a remote inn with three private buildings (one of which is called “Silence”) that overlook the uninhabited island of Maruyama.
Courtesy of Urashima Village

The small luxury inn opened in January as a place for guests to work in silence, kayak in the sea and explore the land by bicycle.

Staffed by a concierge team and private chef, the inn overlooks the uninhabited island of Maruyama, which guests can enter twice daily when an “undersea road” emerges at low tides, according to the hotel’s website.

While Melbourne gets the lion’s share of the accolades (and tourists) to the Australian state of Victoria, there are numerous destinations outside of the city that deserve recognition.

One such place is the Dandenongs, a quiet mountain range dotted with bucolic bed-and-breakfasts, forest gardens and family-owned restaurants.

Less than an hour from Melbourne, the Dandenongs Ranges is a mountainous area with superb food and small-town friendliness.
Nigel Killeen | Moment | Getty Images

Upscale homes can be rented from Valley Ranges Getaways, which is located in Sassafras, one of the area’s most popular villages. Another visitor favorite, Olinda, sits just two miles down the road. Both are lined with artisan shops, antique stores and restaurants stocked with local wine.

Travelers can make the drive to Healesville Sanctuary for close encounters with wombats and kangaroos, or prebook tickets to ride on Puffing Billy, a preserved open-carriage steam railway.

Travelers to and within the United States may want to skip the coasts this year in favor of the American southwest.

Averaging 17 people per square mile, New Mexico is the seventh least densely populated state in the U.S., according to the data company Statista. Nicknamed the “Land of Enchantment,” the state has national parks and Aztec ruins, wonderous caves and rugged red and white desert biomes.

Some of New Mexico’s most luxurious hotels, such as The Inn of the Five Graces and Hotel St. Francis, are in the capital of Sante Fe, which has a population of 85,000.

Ghost Ranch near Abiquiú, New Mexico is an area with an eclectic mix of former inhabitants, including dinosaurs, Spanish settlers and the artist Georgia O’Keeffe.
Dean Fikar | Moment | Getty Images

The Four Seasons Resort Rancho Encantado Sante Fe, however, is set on 57 acres outside the city. Guests stay in suites and detached casitas, which means “little houses” in Spanish, that are outfitted with southwestern décor and wood-burning, pueblo-inspired kiva fireplaces.

Overlooking the Rio Grande River Valley and the nearby Jemez Mountains, the resort sports a year-round pool, outdoor firepits, and an adventure center which organizes hot air balloon rides, horseback riding and whitewater rafting, as well as cultural tours to Ghost Ranch or Bonanza Creek Ranch where movies such as “Cowboys & Aliens” and “Wild Hogs” were filmed.

Both islands are special municipalities of the Netherlands, and each receives fewer than 10,000 tourists by air a year, according to Dutch governmental agency Statistics Netherlands.

Saba and Saint Eustatius (shown here) are part of the Dutch Antilles and provide a remote escape to hike, dive and delve into ecotourism.
Westend61 | Westend61 | Getty Images

A third of visitors are from other islands — namely, Aruba, Curaçao and Saint Martin — with at least another third comprising travelers from the U.S. and the Netherlands.