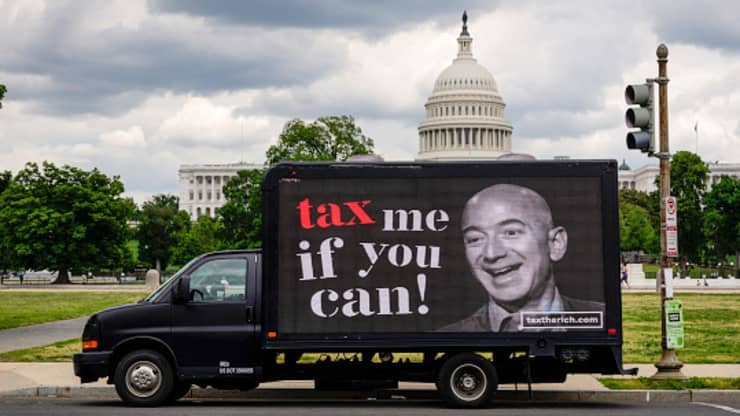 Millionaires who have called on the rich to pay more in taxes are launching protests in New York and Washington on Monday — Tax Day — including in front of Amazon CEO Jeff Bezos’ homes.

The effort is being organized by the Patriotic Millionaires, whose members boast annual incomes of over $1 million or assets worth over $5 million. The details of the effort were first shared with CNBC.

The group plans to launch its Tax Day campaign on Monday, and includes mobile billboards that will make stops in front of Bezos’ homes in New York and Washington. Leaders of the Patriotic Millionaires told CNBC they are organizing a group of up to 30 protesters to converge on to Bezos’ New York residence with a billboard that says “Cut the bull—-. Tax the rich.”

The move to blast Bezos in front of his home comes as President Joe Biden and Democratic lawmakers seek to raise taxes on corporations and those making over $400,000 in order to pay for their $2 trillion infrastructure proposal.

Biden has recently said he’d like a corporate tax hike of 25% to 28%, while proposing to raise the top income tax rate from 37% to 39.6%. Republicans have said they don’t want to raise any taxes to pay for infrastructure. The two parties are trying to come up with a bipartisan bill and have said they are making progress.

But progressives are eager to see billionaires pay more.

“Jeff Bezos is the poster child for the total idiocy of the country’s tax code,” Erica Payne, founder and president of the group, told CNBC on Friday. She said Bezos’ extreme wealth means he should be paying more in taxes. She noted that the tech tycoon is reportedly in the midst of building a nearly 417-foot yacht that’s likely to cost over $500 million.

Bezos has a net worth of over $185 billion, according to Forbes, and has been a target of progressives for the need to raise taxes on the wealthy.

A spokesperson for Amazon did not return a request for comment but Bezos has said he supports raising corporate taxes.

The Patriotic Millionaires are in favor of Sen. Elizabeth Warren’s ultra millionaires tax plan, which would put a2% annual tax on wealth over $50 million, rising to 3% for wealth over $1 billion.

Morris Pearl, chairman of the group and a former BlackRock executive, told CNBC that the organization will be pushing for a wealth tax, among other tax increase proposals, throughout Tax Day. Others on the Patriotic Millionaires advisory board include Abigail and Tim Disney, two children of the late longtime Disney executive, Roy Disney.

Bezos′ $23 million D.C. mansion was once the old Textile Museum.

The other billboard being featured in the day-long campaign has the laughing faces of Bezos, Facebook CEO Mark Zuckerberg and Tesla CEO Elon Musk. One of the billboards says “tax the rich. Save America. Yes it really is that simple.” Another has the three business leaders laughing and reads “tax me if you can.”

Are you already an investor in Vanuatu?  Do you need help with those pesky tasks that pile up?  Registration procedures done at https://tradeboard.biz.  Inquire with Trade Board Limited.