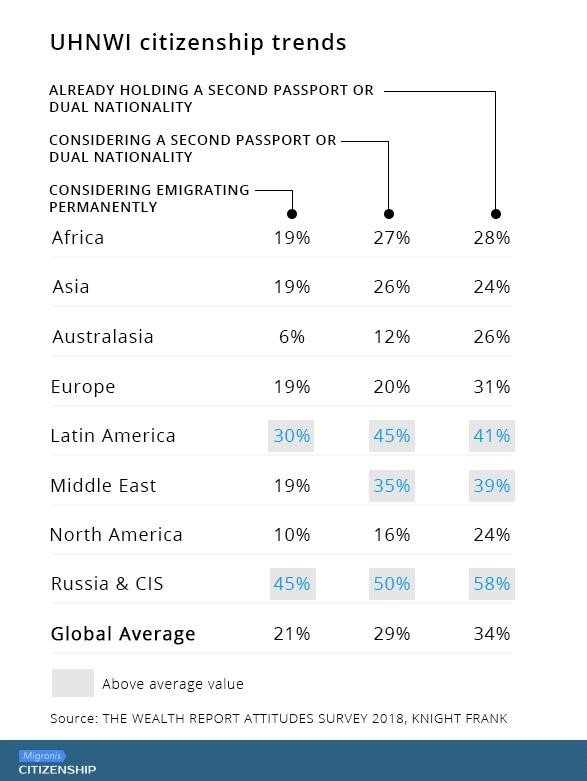 Сitizenship by investment: A safe haven for investors and their families

Wealthy businessmen are often looking for greater freedom and ways to secure themselves and their families with a Plan B in case of unforeseen unrest in their country of residence, as well as to lessen the taxation burden. That is why an increasing number among them turns to the citizenship by investment option.

The possibility of putting together a contingency plan is one of the main reasons prompting foreigners to obtain another country’s passport. The investor and their entire family can relocate to a better developed country in the event of political, economic or social force majeure at home. Investors from Russia, China, South Africa, the Middle East and South Asia are particularly interested in obtaining a second passport for obvious reasons.

Important to know! Holders of European passports can reside indefinitely in any of the 28 European Union countries. Holders of Caribbean passports are allowed to reside there all year long, and stay up to 90 days in a 6-month period in the Schengen Area countries.

Which famous people already have their second passports?

Pavel Durov, the Russia-born genius behind the VKontakte and Telegram social media and messaging platforms, obtained a Saint Kitts and Nevis passport in 2014. Roger Ver, the famed crypto-currency investor, also owns this country’s passport, as does Adam Bilzerian, a world-renowned poker player who had renounced his US citizenship upon obtaining a Caribbean passport.

** Information is provided by Migronis company

Some stats on passports issued by CBI countries

According to the 2018 World Wealth Report, about 28% of affluent African businessmen, 39% of the ultra-wealthy Middle Easterners, and 41% of Hispanic high-income citizens have obtained a citizenship of another country, as well as over 58% of Russian and CIS countries. On average, 34% of the global wealthy population – individuals with an estimated net worth of over US$30 million – own second passports.

Vanuatu CIP: Why crypto-investors should apply

Crypto-investors who are thinking about obtaining a second citizenship should definitely pay attention to Vanuatu passport program. And here’s why. Head of the Vanuatu Information Centre, James Harris, announced in Spring 2018 that Vanuatu has started to accept bitcoins as a payment method for a second passport. Already, this small Pacific country has approved several such applications.

What attracts the attention of foreign investors to Vanuatu citizenship by investment program?

The processing only takes three weeks. Citizens of Vanuatu can travel to 120+ countries without visas, including the UK, the Schengen Area and Singapore. Moreover, all monetary transactions are made through an escrow agent, this way, the investor’s finances are fully protected. Here you can check a more detailed instruction on obtaining a Vanuatu passport.

A second passport is a must-have for any successful businessman

There are several ways of becoming a citizen of another country, but the quickest and most reliable one for businessmen and investors is via investing in the economy of their country of choice. A second passport expands visa-free horizons, allows one to create a Plan B and optimize taxes.

Costa Rica one of the easiest Countries for travelling. To read more click salonhanan.com